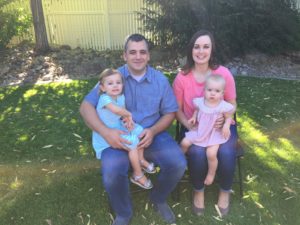 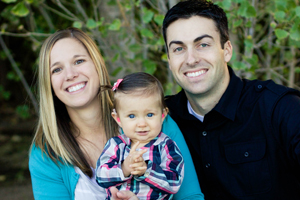 We are the Foulger Family. There is Gavin who is 29 and works as a consultant for CSS international, Gena who is 28 and works part time as a registration coordinator for Race Place Events and enjoys being a full time mom, and then there is our sweet daughter Macie who is a busy 18 month old. Macie was born with a mild/moderate bilateral conductive hearing loss. She wears hearing aids and has had them since she was 7 months old. We have been thrilled with how much Macie has progressed since she has had her hearing aids. At this stage in her life we focus a lot on language development. She keeps us busy and is becoming a very active toddler. As a family we enjoy going on bike rides, swimming, going to Costco to sample all the goodies, playing at the park, and going to the zoo.

We have two daughters. Cassie is 11 and Emmy is 7. Emmy failed her newborn hearing screenings at birth. The nurses told us not to worry, and we didn’t. There was no reason for us to believe that our daughter would have a hearing loss. No one in our family is deaf, there were no complications with the pregnancy, and Cassie, our oldest was hearing. Still, we continued with testing and at 4 months, received the news that Emmy had a profound hearing loss. She was fit with hearing aids and received no benefit. She was enrolled in an oral school at 5 months old. She received her first implant at 13 months old. At 4 1/2, Emmy graduated from her school and was ready to be mainstreamed. She started pre-school at her sister’s charter school. Emmy was bilaterally implanted at 6 years old. She is now in second grade and doing great. She is in a Girl Scout troop and takes Karate lessons. She loves to do anything outside and has an amazing sense of humor. It’s been a long couple of years, but well worth it. We wouldn’t trade our experience for anything. 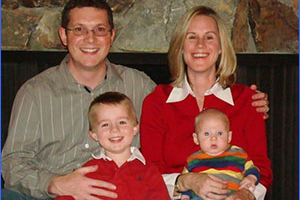 Logan is our first son and he is age 3. Logan was born with full hearing. The first hearing screening Logan referred on with his left ear but a day later was re-tested and he passed. Doctor said he could have had fluid in his ear due to c-section delivery. Logan goes to school two days a week at Paradise Valley Cooperative Preschool and really enjoys his time there. His favorite activities are Soccer Tots and Golf with his Grandpa who he calls “Big Moon.”

Corbin is our second son who is now 6 months old. Corbin was diagnosed shortly after birth with a severe to profound hearing loss. Currently, Corbin is wearing loaner hearing aids from the Ear Foundation. Corbin is also enrolled in therapy at Desert Voices in which he attends once a week for an hour. Corbin is doing really well in therapy and responding to a wide variety of sound both at therapy and at home. We are not sure if Cochlear Implants is what Corbin will need right away but we are very open to getting him implanted if that is the route that his therapist and audiologist recommend for our family.

At first my husband and I were very concerned for Corbin’s future but after having spent lots of time with other families and seeing the children who have been aided and implanted at such young ages we feel much better about the bright future Corbin will have.

Both my husband Scott and I are fully hearing. We are unaware of any hearing loss on either side of our families. We have not done any genetic testing as of yet but are keen to in the future just to see if by chance we do have any of the hearing loss genes. 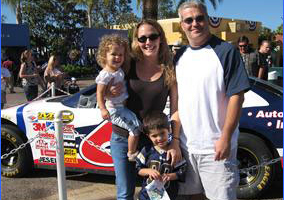 Our story starts with our first born son Kaidan. Kaidan was born in August of 2003. Several hours after he was born our pediatrician alerted us to a potential problem. Kaidan was born with a white forelock of hair and bright blue eyes both of which were classic signs of Waardenberg Syndrome. Kaidan would go on to fail all of his newborn hearing screening. At 48 hours old we had him tested at the House Ear Institute where they confirmed him to be profoundly deaf in both ears. Not sure where to turn for answers we were recommended to the John Tracy Clinic. We decide that we wanted Kaidan to be oral so at 6 weeks old he was fitted with his first pair of hearing aids. By age 1 the hearing aids were still not a benefit. At that time Kaidan qualified and received a cochlear implant on his right ear. The results were amazing. At age 2 Kaidan received his second implant and again the results were similar. Kaidan attended both the John Tracey clinic in LA and Desert Voices in Phoenix. Last year we mainstreamed Kaidan in a Pre-K class and he is doing great. He loves to go to school and has made a lot of friends. We have been very blessed to have had so many people help along the way both in schools and health care providers. 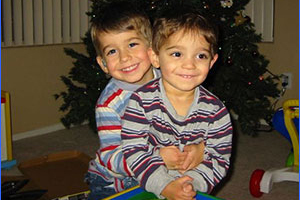 Tyler is our first boy. He failed the newborn hearing screening, and was diagnosed with certain hearing loss at 2 months old. He uses bilateral hearing aids and has learned to speak in Desert Voices Oral Deaf Program. He has attended Desert Voices since he was 11 months old. He does marvelous and amazing in school with his auditory training and speech. He received a cochlear implant when he was 2 and 1/2 years old and he’s had it for over a year now. He was diagnosed to be severe to profound hearing loss by genetics (Connexin 30 deletion genes).

Kasey is our second boy. He failed the newborn hearing screening, and was diagnosed with a mild hearing loss at 4 weeks old. He uses bilateral hearing aids and has learned to speak in Desert Voices. He has attended Desert Voices since he was 6 weeks old. He makes an incredible progress with his speech and auditory training. He was diagnosed to be mild hearing loss by genetics (Connexin 26 and missing gene). Both my husband and I are deaf. The boys are very good with code switching their communication with us. They use both speech and sign language at home. 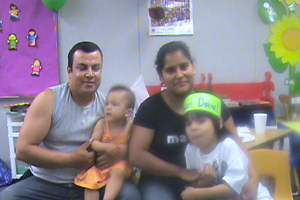 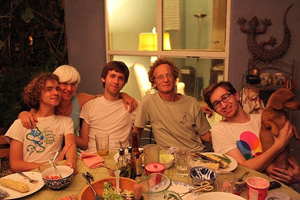 Greg and Michael are off to college leaving Eric at home enjoying the status of only child. Although the boys are older now, we still remember the days of seemingly endless appointments with a string of doctors to find out if Michael could hear. For Eric, in contrast, we found out he was deaf within two weeks of his birth. With wonderfully supportive friends, family, and service providers, lots of patience and humor, our family thrived. Yes, we lived through hearing aids in the garbage disposal, FM receiver lost on the playground, hours of driving to speech therapy, even more hours driving to meet other families with children who were deaf and hard of hearing (DHH), learning to sign bedtime stories, combined 27 years of IEP meetings, even relocating our family so that the boys could access better services. Michael and Eric went to every kind of school imaginable: neighborhood charter, state school for the deaf; with & without DHH programs; with & without interpreters and FM systems. Now Michael attends Carnegie Mellon University, studying theater set design. Eric starts his sophomore year at our neighborhood high school. We been through the extra-curriculars as well: piano, saxophone & violin lessons, soccer, art class, drama club, Boy Scouts, Academic Bowl, community service, church camp, driver’s ed, martial arts, summer reading program at the public library. Along the way we have met amazing, wonderful people who have touched our lives in so many ways. Among those people is the very special group of parents with children who are deaf and hard of hearing; the ones who really get it.